Chérie Kelly Cakes and Flowers > Cakes > Croquembouche
I always wanted to make one after watching The Great British Bake Off on BBC. 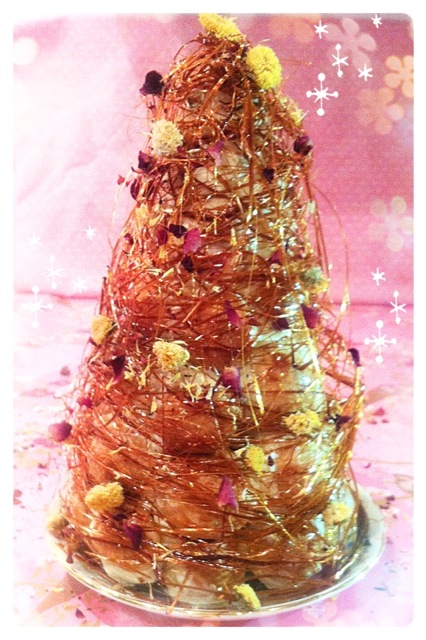 I was looking for the recipe and procedures to avoid making the choux pastry soggy and the tower collapse. As it is my first time making choux pastry, I decided to make some small ones to start with. 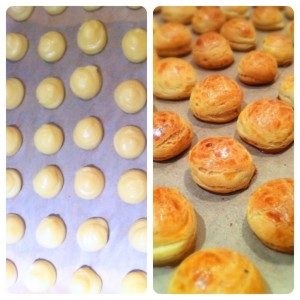 They turned out very well with the size of a one pound coin as planned, they are a bit too small to pipe the filling though..

I folded a paper shaping cone with A4 papers, turned the cone upside down, stack and “stick” them together with white chocolate. I put this pyramid into the freezer for half an hour for the chocolate to set, removed the cone and it turned out a little cute pâte à choux tower! I couldnt wait to dress it with spun sugar (♥ ‿♥) , so pretty!

I halfed the amount for this small version of Croquembouche

For the Choux Pastry

For the cardboard cone

1. Three days ahead (or 1 month and freeze): preheat the oven to 200C/gas 6/fan oven 180C. Lightly butter 3 large baking sheets. Sift the flour onto a large square of greaseproof paper. Put the butter in a large, heavy-based saucepan with 450ml/3⁄4pint water and gently heat until the butter has melted. Bring to the boil then immediately tip in the flour, all in one go. Beat with a wooden spoon until the mixture forms a ball that comes away from the sides of the pan. Leave to cool for 5 minutes.

2. Beat in the eggs, a little at a time, beating well between each addition, until the mixture is glossy and only just holding its shape. You may not need to add all the beaten egg. Spoon and pack half the mixture into a large polythene freezer bag. Twist the opening to secure and snip off a 1cm tip from the corner (or use a piping bag and 1cm plain nozzle).

3. Pipe small rounds, about 2cm in diameter, on to the baking sheets, trimming the paste from the bag with a knife. Leave room between them to allow for spreading. You should end up with about 75 rounds. Bake for 25 minutes, in batches if necessary depending on how many baking sheets you have, until well risen and golden, rotating the baking sheets half way through cooking. As soon as the pastry is cooked, make a 1cm slit on the side of each bun to let the steam escape. (This stops them turning soggy as they cool). Return to the oven for a further 5 minutes to dry them out, then transfer to a wire rack to cool. Store in an airtight container (or freeze).

4. Make the cone. Make a pencil mark halfway along a long edge of the A1 card. Mark the halfway position along both short edges and draw a line from each point to the mark on the long edge. Attach one end of the string to the pencil and holding the other end at the point on the long edge, draw a curve from the point on one short side to the point on the opposite side. Cut out the card shape and use as a template to cut out the same shape in foil. Tape the foil over the card and roll up (foil inside), overlapping the straight edges to make a cone shape with a 20cm diameter opening. Secure with tape and snip 10cm off the point of the cone.

5. Two days ahead: make the limoncello cream. Beat the egg yolks, sugar, flour, lemon zest and juice in a bowl to make a smooth paste. Bring the milk to the boil in a large, heavy-based saucepan. As soon as it reaches the boil, pour it over the egg mixture, stirring well. Return to the saucepan and cook over a low heat, stirring constantly until the sauce is very thick and bubbling. Stir in the liqueur and transfer to a bowl. Cover the surface with a circle of greaseproof paper to prevent a skin forming and leave to cool completely. Refrigerate until ready to use.

6. The day before: if the buns are a bit soft when you take them out of the container, lay them in a single layer on baking sheets and re-crisp in a moderate oven for 5 minutes. Fill them sparingly with the limoncello cream by piping as before. You can always pipe in a little extra if you have any mixture leftover.

7. Break the chocolate into a heatproof bowl and melt over a bowl of gently simmering water. (Or melt in the microwave on Medium for 2-3 minutes.) Give the chocolate an occasional stir until it has just melted. Turn off the heat.

8. Rest the cone inside a vase or jug for support. Put a small bun into the point of the cone with the bun’s base face up. Spoon 1 tsp of melted chocolate onto the base and secure two small buns over the first, again with base up. Spoon over another teaspoon of chocolate. It’s a little difficult working at the tip of the cone but it gets much easier as the cone gets wider.

9. Work up the cone, packing in the buns quite firmly, drizzling the chocolate (see left) and working in horizontal layers until the cone is filled. Make sure that each bun is firmly secured in place with chocolate before proceeding to the next layer and make sure the last layer forms a flat base for the cake. Keep the filled cone in the coolest place overnight.

10. On the day: carefully invert the cone on to a flat serving plate and lift away the cone. Gently peel away the foil if it hasn’t come away already. Put the remaining 100g/4oz sugar in a small heavy-based saucepan with 5 tbsp water. Heat very gently, stirring slowly until it has dissolved to make a smooth syrup. Take care not to splash the syrup up the sides of the pan or it may crystallise and solidify.

11. Bring the syrup to the boil and cook for 4-6 minutes, watching closely until it turns a rich golden colour. Take off the heat and dip the base of the pan in cold water to prevent further cooking. Stand back as the pan will splutter noisily. Carefully dip the ends of the sugared almonds and roses in caramel and secure around the cake, scattering a few on the plate.

12. Using a teaspoon, drizzle more caramel around the buns so that it falls in fine threads. If the caramel hardens before you’ve finished decorating, gently reheat it, taking care not to burn it. Finish with a dusting of icing sugar. To serve the cake, it is easiest if you have one server to break pieces off for the guests, starting from the top and working down.