After indulging an Ispahan from Laduree, I decided to make one myself. The combination of lychee, raspberries, rose buttercream and macaron shells is just prefect. 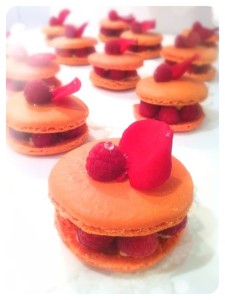 The recipe is actually the same from the rose macarons, lychee and raspberries are added in between the macaron shells.

For the Rose Buttercream

1. Sieve the ground almonds and icing sugar into a bowl. Add the colouring into the first portion of egg whites, pour them into the sugar/almond mixture but do not stir.

2. Bring the water and sugar to boil to 118 degree in a saucepan. When the sugar syrup reaches 115 degree, start whisking the second portion of egg whites until soft peaks. Once the syrup reaches 118 degree, pour it over the egg whites take down the side of the bowl, continue to whisk on high speed until it cools down to 50 degree and turns glossy.

3. Pour all of the meringue to the bowl with the almond sugar mixture. Fold fold the mixture with a large spatula until it starts to shine and forms a visible ribbon.

4. Spoon the mixture into a piping bag fitted with a plain nozzle and pipe rounds of 7cm with 2cm gaps apart from each other onto parchment paper. Set aside for about 30 minutes or until a skin forms that does not stick onto your finger.

5. Bake the macarons in preheated oven between 160-180 degree for 12 mintues. Remove the macaron shells from the oven and tray, place the parchment onto the work surface and let cool completely before removing the shells.

1. Boil the sugar and water in a saucepan until 120 degree. At the same time, whisk the eggs and egg yolks in a bowl until thickened and lightened in colour.

2. Pour the syrup down the side of the bowl and continue to whisk until cooled.

3. Cream butter in another bowl until thickened, add the egg mixture and whisk until smooth, then beat in the rose syrup and essence.

2. Chill overnight to set before serving.

One thought on “Ispahan”