Winnie from WLFF asked me if I could sponsor cupcakes for a 80s retro game themed charity event, it helps to raise funds for charity to build new schools in Nigeria. She approached me after seeing the PS3 cake and thought I could helping making some cupcakes with Super Mario, Sonic The Hedgehog and Pacman etc to match the 80s theme for 150+ guests. I also realized she is a friend of Azzy and Omar’s, and it was for a charity event, I took on this large order.

Thinking of the popular flavours like Red Velvet, Vanilla Marshmallow, Oreo Chocolate, Banana and Carrot Cupcakes would be nice for guests to have different variety to choose from. I also took the colour scheme into account because I wanted Mario, Sonic, Pacman and friends to look good on cupcakes 🙂 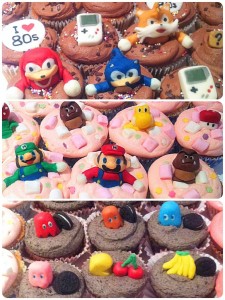 I do think my time management skill is quite good, I managed to go out a few nights and still had enough time to hand-make the cupcake toppers during the week with sugarpaste. Which one do you like most? 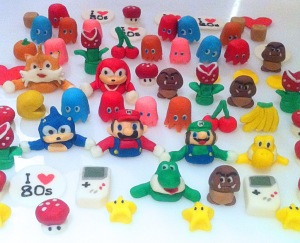 Super Mario and friends look the best on Vanilla Cupcakes with Marshmallow Frosting. 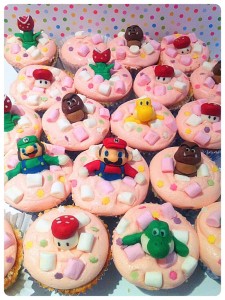 Sonic the Hedgehog and friends on Banana Cupcakes with Chocolate Frosting. 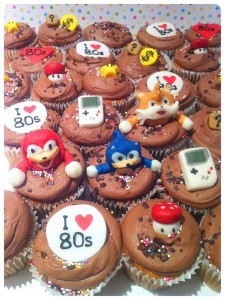 Pacman and friends are best on Chocolate Cupcakes with Oreo Frosting! 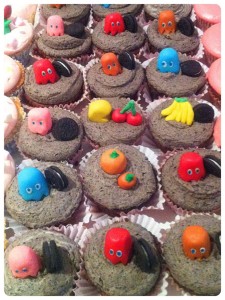 I left Carrot Cupcakes and Red Velvet Cupcakes without any toppers as I think some people might prefer a simple cupcake to eat. I totally broke my record making 100+ cupcakes!

Delivering them was another massive challenge!! Putting them nicely in big boxes and carrying them carefully were under our own control, but bumps on the road were not :,-( will definitely ask the driver to drive very slowly next time.
I walked into the venue and was amazed by all the details and effort Winnie and her friends put in to set up the place. It was truly a 80s themed event with all the retro old school computer and board games classics like Sega, Pacman, Super Mario Bros, Twister, Giant Jenga. There were also table football, pool tables, darts, DJs, photoshooting corner etc, and a very eye-catching huge display of confectionery table for my cupcakes ❤ 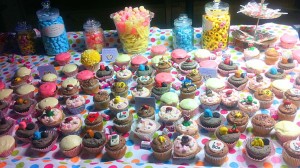 It was a great success of the event & my cupcakes (^o^)♫  Very well done to Winnie and her friends and Cherie Kelly ;-P
Super Mario, Sonic The Hedgehog and Pacman Cupcakes was last modified: September 22nd, 2014 by CherieKelly

Jewellery Cupcakes for the IT FOUND ME Tea Event