When I was in Paris, I saw Éclair in every pâtisserie window, I didnt realize they were actually very popular until I read a book about different varieties of French pastry. They are sold in big profiterole rather than oblong shape in Japan and Hong Kong, while filling and icing are quite similar, my favourite flavours are Earl Grey and vanilla crème pâtissière cream puff from Beard Papa’s, they used to have a branch in Oxford Street and sell different flavours everyday, I went there almost every other week to grab one or a box to share with friends, but it is now closed 🙁 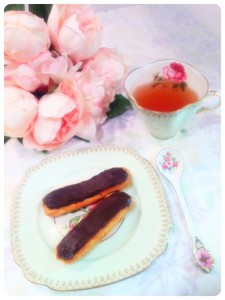 Recipe adapted from On Cafe:

For the French Éclair

1. Place butter, milk and water in a saucepan and bring to boil.
2. Mix the flour, salt and sugar together in a box.
3. Once the butter has melted, take the saucepan off the heat and tip in the dry flour mixture. Beat well with a wooden spoon until incorporated.
4. Beat the eggs gradually into the mixture until well-combined, the mixture should be shinny and springy.
5. Transfer the mixture into a piping bag.
6. Preheat the oven to 180’C.
7. Pipe the choux pastry into finger-length for mini éclairs with space in between onto a baking mat.
8. Bake the tray of mini éclairs in the oven for 30 mins, or until golden-brown and firm.
9. Leave them to cool on a wire rack. 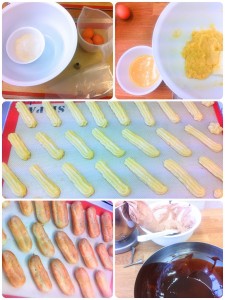 1. Beat the egg yolks, sugar, and flour in a bowl to make a smooth paste.
2. Bring the milk to the boil in a saucepan.
3. As soon as it reaches the boil, pour it over the egg mixture, stir well.
4. Return the whole mixture to the saucepan and cook over a low heat, stirring constantly until the sauce is very thick and bubbling.
5. Transfer to a bowl and cover the surface with cling film to prevent a skin forming and leave to cool completely. Refrigerate until ready to use.
6. Pipe them into the éclairs an hour before serving.

For the Chocolate Ganache Glaze

1. Break chocolate into pieces and place into a bowl.
2. Boil the cream in a saucepan in medium heat.
3. Pour the the hot cream onto the chocolate, stir well until combined.
4. Mix in the glucose.
5. Carefully dip the top of the éclairs into the glaze, leave them with the glaze facing up on a wire rack until set. 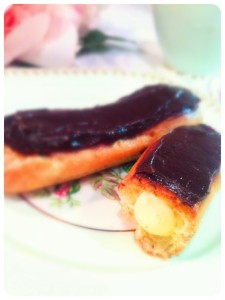