I think macarons is the most complicated thing to make in the patisseries world! All the ingredients have to be in its prefect measure and condition, like egg whites have to be aged for at least a few days, egg whites cannot be over-whisked, sugar syrup has to be cooked to 118’C etc..(which means I made myself to buy a thermometer to measure the temperature of the sugar syrup).. , macarons mixture have to piped in same-sized circles, fillings have to be in the right texture.. most importantly is the patience to leave the piped mixture to leave in room temperature for at 30 mins to form the skin, then bake each tray one by one in low temperature! I usually make at least 2 flavours, which mean there are 8-10 trays of shells to bake, it takes me 2 whole days to finish the whole process. I do love these challenges! and would like to master all the technique to make pretty macarons soon. 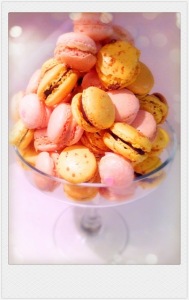 I made these last time to bring home to friends and family in Hong Kong : ) 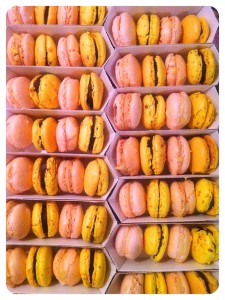 For the hazelnuts chocolate ganache

1.       Line 2-3 silicon baking mats with macarons circle-shaped template underneath. (You can draw a parchment with circles 1½in/3.8mm wide around a shot glass, spacing them ¾in/2cm apart, turn the paper over and use it as a template). You can also use baking sheets with baking parchment, but silicon baking mats do make better macaron shells.
2.       Sift the icing sugar, ground hazelnuts and ground almonds into a large bowl. (I usually skip this step as I don’t see much difference with the shells)
3.       Divide the egg whites into two equal portions.
4.       Mix the food colouring into one portion, pour to the bowl with the icing sugar and almonds do not mix it.
5.       Put the mineral water in a small pan and add the granulated sugar. Heat gently until the sugar dissolves, then boil the syrup using a thermometer to track its temperature.
6.       Meanwhile, put the other half of the egg whites in a bowl and plug in the electric beaters. When the syrup reaches 240F/115C, begin to beat the second quantity of egg whites to soft peaks.
7.       Once the syrup reaches 244F/118C, pour it slowly on to the whites, beating all the time. Keep beating until the mixture returns to a soft peak consistency and has cooled to 122F/50C. (This egg white-syrup mousse is what chefs call an Italian meringue.)
8.       Add the beaten egg whites to the bowl with the icing sugar and almonds,  mix until it is incorporated without trying to fold in too much air.
9.       Spoon the mixture into a piping bag fitted with a 1cm plain tip. (Depending on the size of your piping bag, you’ll probably need to do this in three or four batches.)
10.   Pipe the mixture onto silicon baking mats with the template underneath or baking sheets lined with the parchment paper marked with circles.
11.   Tap the baking sheets on a work surface covered with kitchen towel to release the air bubbles from the macaron shells.
12.   Let the shells stand for half an hour, until a skin forms on the surface. Meanwhile, preheat the oven to 350F/180C/gas mark 4.
13.   Slide the baking mats/sheets into the middle or lower shelf of the preheated oven. Bake for 12 minutes, quickly opening and shutting the oven door twice during the cooking time to let the steam escape.
14.   Take the baking mats/sheets out of the oven. Slide the mats/sheets of parchment paper with shells onto a work surface and leave to cool.

To make the ganache

1.       Cut the butter into pieces.
2.       Break all the dark and milk chocolate into pieces and put into a bowl. Boil the cream and pour about a third at a time onto the chopped chocolate, mixing each time. The mixture will separate and look grainy, but keep mixing and it will come together.
3.       Allow the chocolate mixture to cool to 122F/50C.
4.       Add the hazelnut spread and chopped butter, beat until smooth.
5.       Pour into a wide dish. Press clingfilm onto the surface of the ganache and refrigerate until thick enough to pipe.

To assemble the macarons

1.       Spoon the ganache into a pastry bag fitted with a 1cm plain tip. Pipe a generous round onto a shell, then top with another shell, twisting lightly so that the filling spreads and bulges enticingly.
2.       Store the macarons covered in the fridge for at least 24 hours to allow the inside of the macaron shells to soften.
3.       Bring back to room temperature before eating.

1.       Sift the almond flour and powdered sugar in a medium bowl. Split the vanilla beans and scrap the seeds. Add them to the almond flour & powdered sugar mixture. Add the first hlaf of egg whites (110g) to the almond/sugar/vanilla mixture, without mixing them.
2.       In a small saucepan, combine the water and sugar, bring to a boil until it reaches 118′C. Meanwhile, place the second half of egg whites in the bowl of a mixer equipped with the whisk attachment. When the sugar syrup is at 115′C start beating the whites on medium speed until they reach soft peaks.
3.       Pour the sugar at 118′C over the egg whites. Beat until the temperature of the mixture drops to 50′C. Fold the meringue into the almond-sugar-egg white mixture until it’s homogeneous. Place in a large pastry bag with a plain 1cm tip.
4.       Place parchment paper on two baking trays and use a pencil to draw 1 1/2 inches circles to cover the surface with 1/2 inch in between. You should have 36 circles on each parchment papers. Turn over the paper so the pencil marks won’t transfer to the meringues.
5.       Pipe rounds of the meringue dough onto the prepared parchment paper. Let the meringues out at room temperature for at least 30 minutes. This is a very important step as the piped meringue rounds develop a thin ‘crust’ over their surface during the rest.
6.       Preheat the oven to 350′F/180C. Bake the meringues for exactly 12 minutes. Open the oven door quickly-twice during cooking. When the cookies are cooked slide the parchment paper onto a work surface and leave them to cool.

1.       Split the vanilla beans in half and scrap the seeds with the tip of a knife. Add them to the heavy cream along with beans. Bring to a boil in a small saucepan. Remove from heat. Cover and let infuse 30 minutes.
2.       Place the chopped white chocolate in a bowl of a bain-marie and melt. Remove the vanilla beans from the cream and pour the mixture over the melted chocolate in three addition. Mix until smooth and scrap the mixture in a pyrex dish. Cover with plastic wrap and let it cool in the refrigerator.

1.       Place the vanilla ganache in a pastry bag equipped with a plain tip. Garnish half the vanilla meringues with the ganache and cover with the other half to make a sandwich. Refrigerate in an hermetic box for 24 hours. Let them come to room temperature before enjoying them. 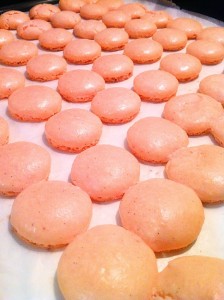