I havent made macarons for ‘a while’ and would like it to be a bit different, I personally really like the combination of raspberries, lychee and rose buttercream from the Ispahan, this time trying to be simpler and make it taste like Eton Mess 😉 when blackberries, raspberries, vanilla ganache and macaron shells go so well together ✿ 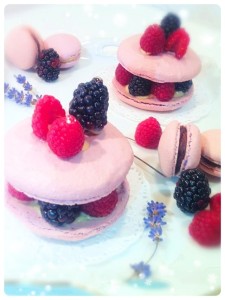 1. Sift the almond flour and icing sugar in a big bowl. Add first half of egg whites (110g) to the almond/sugar mixture, mix in the food colouring to form a thick almond paste.
2. In a small saucepan, combine the water and sugar, bring to a boil until it reaches 118’C. Meanwhile, place the second half of egg whites in the bowl. When the sugar syrup is at 115’C start whisk the whites on high speed until they reach soft peaks.
3. Gently pour the sugar syrup at 118’C over the egg whites. Whisk on low speed until the temperature of the mixture drops to 50’C.
4. Fold the meringue into the almond-sugar-egg white mixture until it is well-combined. Place in a large pastry bag with a plain 1cm tip.
5. Place parchment paper on 4 baking trays and use a pencil to draw 3.5 inches circles to cover the surface with 0.5 inch in between. You should have around 12 circles on each parchment papers. Turn over the paper so the pencil marks won’t transfer to the meringues.
6. Pipe rounds of the meringue dough onto the prepared parchment paper. Leave the meringues out at room temperature for at least 30 minutes to form a thin ‘crust’ over their surface during the rest.
7. Preheat the oven to 165C. Bake the meringues for 12-15 minutes. Open the oven door quickly-twice during cooking. When the macaron shells are cooked slide the parchment paper onto a work surface and leave them to cool.

1. Add vanilla bean paste to the heavy cream, bring to a boil in a small saucepan. Remove from heat. Cover and let infuse 30 minutes.
2. Place the chopped white chocolate in a bowl and melt over simmering water or in microwave. Pour the mixture over the melted chocolate in three addition. Mix until smooth, cover with plastic wrap and let it cool in the refrigerator.

1. Place the vanilla ganache in a pastry bag equipped with a plain tip. Pipe the vanilla ganache to fill the 80% of the macaron shell, place blackberries and raspberries onto the shell, then pipe the other half with the ganache and cover the berries to make a sandwich.
2. Refrigerate in a sealed box for 24 hours. Let them come to room temperature before enjoying them.