It was Kristina’s fabulous 30th birthday yesterday, I didnt believe her turning 30th when I saw her birthday drinks and dinner invitation last week, no idea how she looks so young! Kristina moved from New York to London last year, she is extremely fun and has totally brightened up the whole environment at/after work, everyone loves her! I hope she is not feeling too homesick on her birthday. I decided to make her a Red Velvet Cake and decorated with rose swirls, because I remember she wore a big beautiful flower fascinator to Royal Ascot ❤ 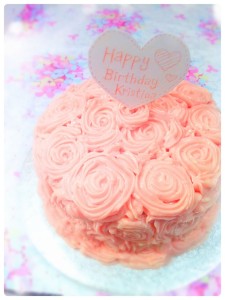 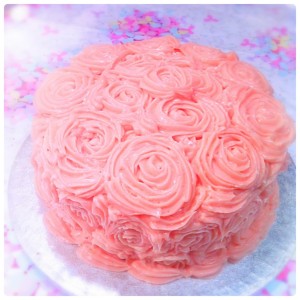 I like the cut-out slice : ) which can see the redness from the cake. 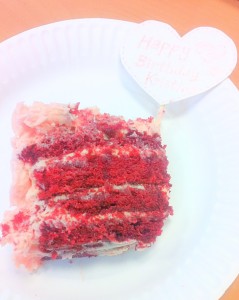 For the red velvet cake:

For the cream cheese frosting:

(this will make enough to sandwich 4 layers and pipe the roses all over the cake)
900g icing sugar
150g unsalted butter, at room temperature
375g cream cheese, cold

2. Put the butter and the sugar in a freestanding electric mixer with a paddle attachment (or use a handheld electric whisk) and beat on medium speed until light and fluffy and well mixed. Turn the mixer up to high speed, slowly add the egg and beat until everything is well incorporated.

3. In a separate bowl, mix together the cocoa powder, red food colouring and vanilla extract to make a thick, dark paste. Add to the butter mixture and mix thoroughly until evenly combined and coloured (scrape any unmixed ingredients from the side of the bowl with a rubber spatula). Turn the mixer down to slow speed and slowly pour in half the buttermilk. Beat until well mixed, then add half the flour, and beat until everything is well incorporated. Repeat this process until all the buttermilk and flour have been added. Scrape down the side of the bowl again. Turn the mixer up to high speed and beat until you have a smooth, even mixture. Turn the mixer down to low speed and add the salt, bicarbonate of soda and vinegar. Beat until well mixed, then turn up the speed again and beat for a couple more minutes.

4. Divide the moxture into 2 portion and pour each portion into each geased tins. Bake in the preheated oven for 30-35 mins, or until the sponge bounces back when touched. A skewer inserted in the centre should come out clean. Leave the cakes to cool slightly in the tray before turning out onto a wire cooling rack to cool completely.

5. Meanwhile for the cream cheese frosting: Beat the icing sugar and butter together in a freestanding electric mixer with a paddle attachment (or use a handheld electric whisk) on medium-slow speed until the mixture comes together and is well mixed. Add the cream cheese in one go and beat until it is completely incorporated. Turn the mixer up to medium-high speed.

6. Continue beating until the frosting is light and fluffy, at least 5 mins. Do not overbeat, as it can quickly become runny.

7. When the cakes are cold, cut them into half so they become 4 cake slices. Sandwich and stack the layers, decorate by piping roses all over.